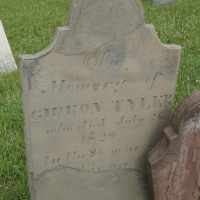 The Life Summary of Gideon

Put your face in a costume from Gideon's homelands.

(1997: 20078;2007: 46215; 2010: 66056)English: occupational name from Old French tieuleor, tiewelier, tuilier, Middle English tiler(e), tiʒeler ‘tiler’, for someone who made or laid tiles for floors or roofs. This name may have become confused with Tiller . Wat Tyler was a leader of the English Peasants' Revolt in 1381, although his name may not have been hereditary at the time.