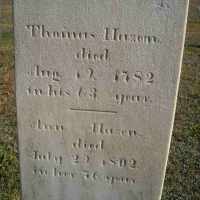 The capture of Fort Griswold was the final act of treason that Benedict Arnold committed. This would be a British victory. On the American side 85 were killed, 35 wounded and paroled, 28 taken prisoner, 13 escaped, and 1 twelve year old was captured and released.
1786 · Shays' Rebellion

English (Yorkshire): from a medieval personal name, a diminutive of Dennis 1.