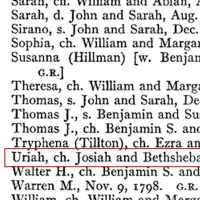 The Life Summary of Uriah

Put your face in a costume from Uriah's homelands.

English (Berkshire and Lancashire): habitational name from Tilton in Leicestershire, named with the Old English personal name Tila, Tilla + Old English tūn ‘farmstead, settlement’.History: William Tilton came to Lynn, MA, in or before 1637. Many of his descendants were master mariners, living on Martha's Vineyard. James Tilton of DE (1745–1822) was a physician who became US surgeon general.