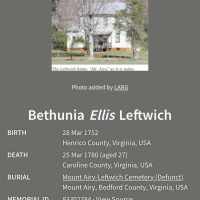 When Bethunia Ellis was born on 26 March 1752, in Henrico, Virginia, British Colonial America, her father, Charles Ellis, was 33 and her mother, Susannah Harding, was 31. She married Thomas Leftwich on 2 April 1771, in Amherst, Virginia, British Colonial America. They were the parents of at least 3 sons and 3 daughters. She died on 25 February 1780, in Mount Airy, Bedford, Virginia, United States, at the age of 27, and was buried in Mount Airy, Bedford, Virginia, United States.

Put your face in a costume from Bethunia's homelands.

Mount Vernon Plantation was the home of George Washington. It started off as 2,000 acres and was later expanded to 8,000 acres. The house itself started off as a six room building then got extended to twenty-one rooms.
1775