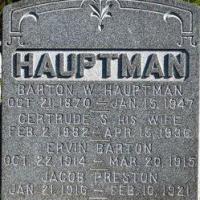 The Life of Barton William

Put your face in a costume from Barton William's homelands.

A federal law which reversed most of the penalties on former Confederate soldiers by the Fourteenth Amendment. The Act affected over 150,000 troops that were a part of the Civil War.
1894 · Confederate Soldiers and Sailors Monument

Variant spelling of Jewish or German Hauptmann . This form is also found in Slovenia and elsewhere.