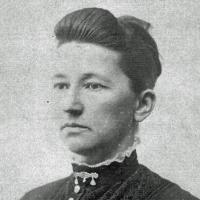 Put your face in a costume from Wealtha Ann's homelands.

Uncle John recalled that each Christmas, Eliza Jane had knitted mittens for her grandchildren. They always fit. He never knew how she could know what size to make for each child. Uncle Jim wrote in h …