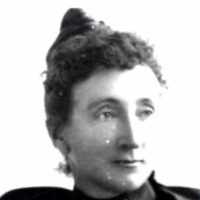 Put your face in a costume from Mary Ann "Nellie"'s homelands.

In the Mid 1870s, The United States sought out the Kingdom of Hawaii to make a free trade agreement. The Treaty gave the Hawaiians access to the United States agricultural markets and it gave the United States a part of land which later became Pearl Harbor.
English, Scottish, and Irish: generally a nickname referring to the color of the hair or complexion, Middle English br(o)un, from Old English brūn or Old French brun. This word is occasionally found in Old English and Old Norse as a personal name or byname. Brun- was also a Germanic name-forming element. Some instances of Old English Brūn as a personal name may therefore be short forms of compound names such as Brūngar, Brūnwine, etc. As a Scottish and Irish name, it sometimes represents a translation of Gaelic Donn. As an American family name, it has absorbed numerous surnames from other languages with the same meaning.

Kate, or Catherine Alice Wilbert, was born on November 14, 1834, in New Jersey. She was baptized a member of the Church of Jesus Christ of Latter-day Saints in December 1852, at the age of 18. She ma …