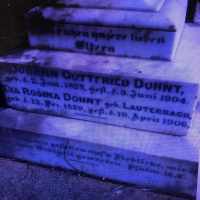 The Life of Johann Gottfried

Put your face in a costume from Johann Gottfried's homelands.

Australia is claimed as British territory.
1837

German (Döhn): from a derivative of the personal name Ant(h)on, German form of Anthony .