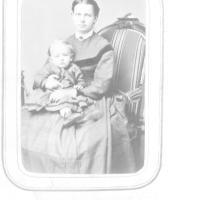 The Life of Helena Elizabeth

Put your face in a costume from Helena Elizabeth's homelands.

The Capitol was located in Iowa City until the 1st General Assembly of Iowa recognized that the Capitol should be moved farther west than Iowa City. Land was found two miles from the Des Moines River to start construction of the new building. Today the Capitol building still stands on its original plot.
1860 · Ohio supports the Union side of the Civil War

Although divided as a state on the subject of slavery, Ohio participated in the Civil War on the Union's side, providing over 300,000 troops. Ohio provided the 3rd largest number of troops by any Union state.
1870 · The Fifteenth Amendment

A name from the Normans from the scriptural name Shimón (in English Simeon), which has been variously translated as "one who hears and grants a petition," "favourable hearing," "gracious hearing," and "hearing with acceptance," from "shama," to hear. A nickname is Sim. Sìm is a Gaelic form of Simon. Sims is a male name derived from Simon.