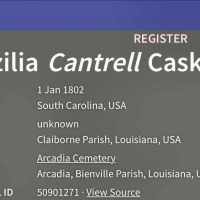 When Brasalia Cantrell was born on 1 January 1802, in Greenville, South Carolina, United States, her father, Thomas J. Cantrell, was 40 and her mother, Elizabeth A. Norris, was 36. She married Thomas Leroy Caskey in 1819, in Tennessee, United States. They were the parents of at least 4 sons and 4 daughters. She died after 1870, in United States, at the age of 69, and was buried in Arcadia Cemetery, Arcadia, Bienville, Louisiana, United States.

Put your face in a costume from Brasalia's homelands.

Louisiana was divided into 19 parishes (rather than counties or boroughs) on March 31, 1807. Currently, there are 64 parishes in Louisiana.
1821 · Financial Relief for Public Land