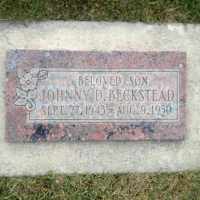 Put your face in a costume from John Derias's homelands.

The Presidential Succession Act is an act establishing the presidential line of succession. This was a precursor for the Twenty-fifth Amendment which outlines what is to happen when a President is killed, dies, or is unable to fulfill the responsibilities of President.
1 North German: partly Americanized form of the topographic name Beckstedde from Low German Beck ‘stream’ + -stedde ‘stead’, ‘place’, or a habitational name from Beckstedt near Wildeshausen, Oldenburg.2 Possibly an Americanized spelling of Swedish Beckstedt, an ornamental name composed of the elements bäck ‘stream’ + stedt (of German origin) ‘place’.