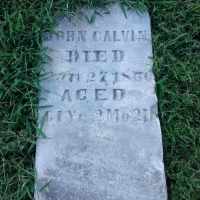 Put your face in a costume from John Columbus's homelands.

War of 1812. U.S. declares war on Britain over British interference with American maritime shipping and westward expansion.
1 Southern French: nickname for a bald man, from a diminutive of Old Occitan calv ‘bald’ (from Latin calvus).2 Spanish (Calvín): from a regional variant of a diminutive of calvo ‘bald’.