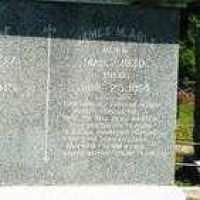 The Life Summary of James Monroe

English: variant of Abel . In North America, this surname may also absorbed cognates from other languages.South German: from a pet form of the personal name Albrecht .

JAMES M. ABLE, who came to the northwestern part of Cooke county during the period of its pioneer development and who has witnessed the wonderful changes and progress in the Red River valley, is now a …