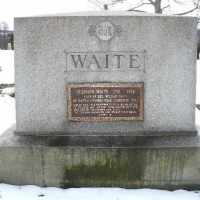 The Life of Stephen E

Put your face in a costume from Stephen E's homelands.

Rhode Island was first to declare its independence from Britain on May 4, 1776.
1783 · A Free America

English: occupational name for a watchman, Anglo-Norman French waite (of Germanic origin; compare Wachter ), or from the same word in its original abstract/collective sense, ‘the watch’. There may also have been some late confusion with White .