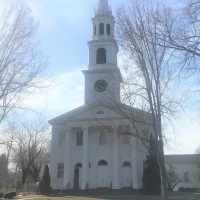 When Samuel Minor was born on 26 July 1708, in Lyme, New London, Connecticut Colony, British Colonial America, his father, Lieutenant William Minor, was 37 and his mother, Sarah Anna Beckwith, was 31. He married Anna Dow on 9 March 1740, in Camp Alfred Vail, Monmouth, New Jersey, United States. They were the parents of at least 4 sons and 2 daughters. He died on 11 October 1745, at the age of 37.