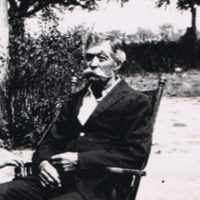 The Life of James Nelson

Put your face in a costume from James Nelson's homelands.

In 1860, the Pony Express used men riding on horseback to carry mail between St. Joseph, Missouri, and Sacramento, California.
1861 · Texas Secedes from the United States

On February 1, 1861, Texas seceded from the United States. On March 2, 1861, they had joined with the Confederate States of America.
1881 · Construction of the Fort Worth & Denver Railway