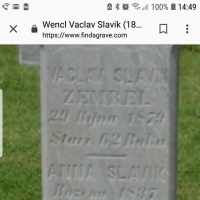 The Life Summary of Wencl Vaclav

When Wencl Vaclav Slavik was born on 8 March 1817, in České Budějovice, Czechia, his father, Josef Slavik, was 22 and his mother, Mariana Chlapikova, was 12. He married Anna S KOUTEK about 1865, in Bohemia, Czechoslovakia. They were the parents of at least 4 sons and 3 daughters. He died on 29 October 1879, in Le Sueur, Le Sueur, Minnesota, United States, at the age of 62, and was buried in Montgomery, Le Sueur, Minnesota, United States.

Put your face in a costume from Wencl Vaclav's homelands.

Czech and Jewish (from Bohemia) (Slavík); Slovak (Slávik): from Czech slavík, Slovak slávik ‘nightingale’, a nickname for a good singer. As a Jewish surname, it may have been adopted by a cantor in a synagogue.