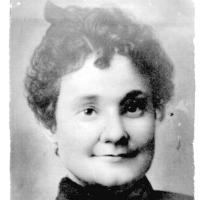 The Life of Cornelia Adelia

Put your face in a costume from Cornelia Adelia's homelands.

In 1871, a cow kicked over a lantern, causing a fire that burned down half of Chicago. Today this city is the third largest in the US.
1876 · The First Worlds Fair in the U.S.

German and Jewish (Ashkenazic): occupational name from Middle High German smit, German Schmied ‘blacksmith’. The German surname is found in many other parts of Europe, from Slovenia to Sweden.