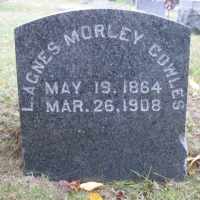 The Life of Lucy Agnes

Put your face in a costume from Lucy Agnes's homelands.

The Cleveland Police Department was created under the Metropolitan Police Act by the Ohio General Assembly. It was headed by a board of police commissioners tasked with the job of appointing a superintendent and officers. The department had become more innovated, starting with adopting the callbox system, using police wagons, and forming mounted units. In 1903, the department was handed over to the city to fund and control it.
1876 · The First Worlds Fair in the U.S.