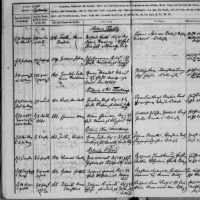 The Life of Catharine Barbara

When Catharine Barbara Handel was born on 20 September 1835, her father, Johann Georg Handel, was 28 and her mother, Dorothea Grüss, was 24. She married Daniel Willging on 14 October 1854, in Teplitsa, Bessarabia, Russian Empire. They were the parents of at least 6 sons and 5 daughters. She lived in Russia in 1835. She died on 2 February 1893, at the age of 57.

Put your face in a costume from Catharine Barbara's homelands.

Starting on October 5, 1853, Britain, France, Turkey, and Sardinia challenged Russia as the country was expanding. The troops fighting against Russia were finally defeated by the harsh winter. Altogether, around 500,000 Russian troops were lost.

1 German (also Händel) and Jewish: from a pet form of the personal name Hans . Sometimes this can be from a pet form of Heinrich, e.g. Heindl, Haindl.2 Jewish (Ashkenazic): metonymic occupational name for a merchant, German Handel ‘trade’, ‘commerce’.