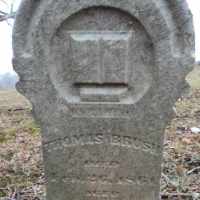 Ohio was the first state admitted to the Union from the Northwest Territory.
1819 · Panic! of 1819

1 English: of uncertain origin. It may be a nickname for someone thought to resemble a brush (Middle English brusche, from Old French brosse), or a metonymic occupational name for a brush maker. It could also be from a related word, brusche ‘cut wood’, ‘branches lopped off trees’ (Old French brousse), applied as a metonymic occupational name for a forester or woodcutter, or a topographic name for someone who lived in a scrubby area of country, from Old French broce ‘brushwood’, ‘scrub’, ‘thicket’ (Late Latin bruscia).2 Respelling of German Brusch or Brüsch, a topographic name from the field name Brüsch (Middle High German brüsch ‘heather’, ‘broom’ or ‘brush’).