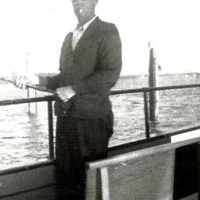 The Life of James Columbia

When James Columbia Miller was born on 2 August 1892, in Seneca, Montgomery, Maryland, United States, his father, Marshall Henry Miller, was 22 and his mother, Margaret Elisabeth Ashby, was 18. He married Julia M Mckenney on 26 December 1912. They were the parents of at least 5 sons and 7 daughters. He lived in Washington, District of Columbia, United States for about 10 years and District 19, Prince George's, Maryland, United States in 1930. He died in December 1959, at the age of 67.

Put your face in a costume from James Columbia's homelands.