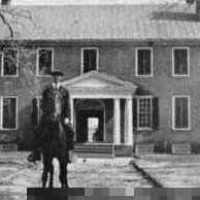 When Anne "Annie" Harden Perkins was born on 9 August 1752, in Goochland, Virginia, British Colonial America, her father, Nicholas Perkins Sr, was 34 and her mother, Bethenia Harding, was 35. She married Joseph Henry Scales on 8 January 1771, in Pittsylvania, Virginia, British Colonial America. They were the parents of at least 5 sons and 6 daughters. She died on 31 May 1829, in Henry, Virginia, United States, at the age of 76, and was buried in Axton, Henry, Virginia, United States.

Put your face in a costume from Anne "Annie" Harden's homelands.