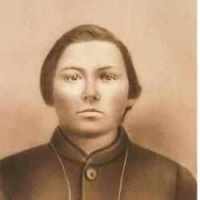 The Life of Alfred John

Put your face in a costume from Alfred John's homelands.

Tennessee was known as the Volunteer State because during the Mexican War the government asked Tennessee for 3,000 volunteer soldiers and 30,000 joined.
1853 · First State Fair

The first state fair in North Carolina was held in Raleigh and was put on by the North Carolina State Agricultural Society in 1853. The fair has been continuous except for during the American Civil War and Reconstruction and WWII.
1861

North German (Pütt): habitational name from any of several places so named in Rhineland, Westphalia, and Pomerania, but in most cases a topographic name from Middle Low German putte ‘pit’, ‘well’, ‘puddle’, ‘pond’.