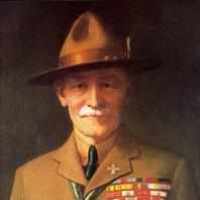 The Life of Robert Stephenson Smyth

When Lord Robert Stephenson Smyth Baden-Powell was born on 22 February 1857, in Paddington, London, England, United Kingdom, his father, Edwin Henry Powell, was 29 and his mother, Emilie Sylvia Godet, was 25. He married Olave St. Clair Soames in 1912, in Poole, Dorset, England, United Kingdom. They were the parents of at least 1 son and 2 daughters. He immigrated to Kenya in 1938. He died on 8 January 1941, in Nyeri, Central, Kenya, at the age of 83, and was buried in Saint Peter's Cemetery, Nyeri, Central, Kenya.

Put your face in a costume from Robert Stephenson Smyth's homelands.

Big Ben is the name of the bell that is inside the clock tower. It is one of the most famous landmarks in London. The famous ringing from Big Ben is the result of it cracking four months after opening.
1863