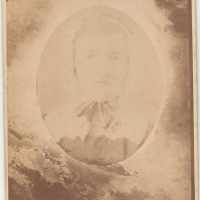 The Life Summary of Nancy Olive

When Nancy Olive Harris was born on 13 May 1798, in Chatham Township, Argenteuil, Quebec, Canada, her father, Silas Gapson Harris, was 35 and her mother, mrs Silas Gapson Harris, was 33. She married Benjamin Brooks on 8 February 1815, in Chatham Township, Argenteuil, Quebec, Canada. They were the parents of at least 7 sons and 6 daughters. She died on 30 December 1871, in Fairfield Township, Fayette, Iowa, United States, at the age of 73, and was buried in Arlington Cemetery, Arlington, Fayette, Iowa, United States.

Put your face in a costume from Nancy Olive's homelands.