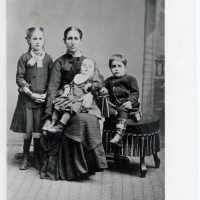 Washington started as part of the Oregon Territory until 1853 when Washington became a territory of its own.
1863