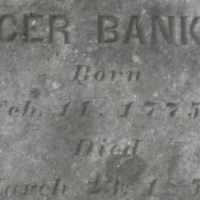 The Life Summary of Spencer Runnel

Put your face in a costume from Spencer Runnel's homelands.

1798 · Mississippi is Organized as an American Territory