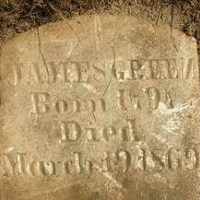 The Life of James "Jim"

Put your face in a costume from James "Jim"'s homelands.

Georgia’s first land lottery act was signed by Governor John Milledge. The first drawings for the land lottery were held two years later in 1805.
1819 · Panic! of 1819