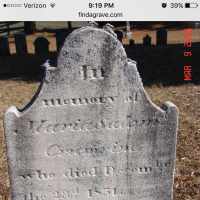 Anna Maria Salome Martin was born on 23 October 1760, in Frederick, Maryland, British Colonial America as the daughter of Georg Martin and Dorothea Smeig. She married John Krumrein about 1782, in Frederick, Maryland, United States. They were the parents of at least 9 sons and 6 daughters. She died on 23 December 1831, in West Manheim Township, York, Pennsylvania, United States, at the age of 71, and was buried in Saint Davids Cemetery, Hanover, York, Pennsylvania, United States.

Put your face in a costume from Anna Maria Salome's homelands.