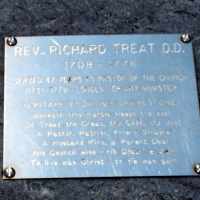 When Reverend Richard Treat was born on 28 September 1708, in Milford, New Haven, Connecticut Colony, British Colonial America, his father, Joseph Treat, was 46 and his mother, Elizabeth Merwin, was 25. He married Mary Thomas on 24 March 1733, in Philadelphia, Philadelphia, Pennsylvania, British Colonial America. They were the parents of at least 3 sons and 2 daughters. He died on 29 November 1778, in Abington Township, Montgomery, Pennsylvania, United States, at the age of 70, and was buried in Abington Presbyterian Church Cemetery, Abington Township, Montgomery, Pennsylvania, United States.

"Founded in 1714, Abington Presbyterian Church is the oldest Presbyterian church in Montgomery Co. and the third oldest in PA. It is the mother church of ten Presbyterian churches in the area. The original small congregation held its services in the home of their pastor Rev. Malachi Jones until 1719 when Mr. Jones sold the church trustees one half acre of his farm ""to build a House for the Publick Worship of God And also a place for Burying the Dead."" The first church was built in the center of the Burying Ground which is now known as the Abington Cemetery. Nothing remains of this church today. The first recorded burial was in 1728. During the Revolution, the British marched up York Road only to be repulsed by American soldiers entrenched behind the wall of Abington Cemetery. Following The Great War (World War I), the town erected a monument honoring those who served in the war on the northwest corner of the cemetery. In 1946 when York Road was widened it was necessary to move some of the graves. The records indicated that there were 21 graves in that section. However when they dug them up, 92 bodies were found, including reportedly, those of some Indians. The cemetery was designated a state historical site by the Pennsylvania Historical and Museum Commission and a marker was placed in the cemetery in 1992. No new full interments are accepted in the original cemetery but they have recently opened a Memorial Garden for cremains."

The Declaration of Independence was signed in Philadelphia on July 4, 1776. The liberty bell was first rung here to Celebrate this important document.
Americanized spelling of German Tritt .

Mr. Richard Treat was born in Connecticut (he was a relation of Governor Treat). His parents were Joseph and Elizabeth Merwin Treat. He graduated at Yale College in 1725, and in 1731 was ordained past …