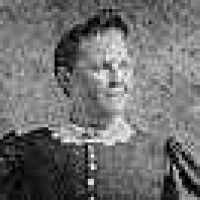 The Life of Elizabeth Edna

When Elizabeth Edna Creekmore was born on 23 March 1827, in Wayne City, Wayne, Illinois, United States, her father, Elisha Battlestick Creekmore, was 22 and her mother, Margaret M Gilreath, was 19. She married Harbin Wilburn McCurry on 21 January 1842, in Jennings, Indiana, United States. They were the parents of at least 10 sons and 2 daughters. She lived in Lincoln Township, Andrew, Missouri, United States in 1870 and Salt Creek Township, Chautauqua, Kansas, United States in 1880. She died on 15 January 1918, at the age of 90, and was buried in Ada, Pontotoc, Oklahoma, United States.

Put your face in a costume from Elizabeth Edna's homelands.

Being a second spiritual and religious awakening, like the First Great Awakening, many Churches began to spring up from other denominations. Many people began to rapidly join the Baptist and Methodist congregations. Many converts to these religions believed that the Awakening was the precursor of a new millennial age.
1856 · The Largest Map Company in the World

English: probably a habitational name from a place in Dorset named Creekmoor, from Middle English crike ‘creek’, ‘inlet’ + more ‘moor’, ‘marshy ground’. However, this surname is not found in current English records.