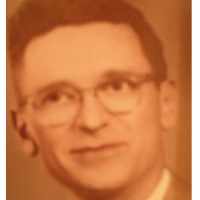 The Life Summary of Harold

When Harold Gottlieb was born on 18 July 1910, in Russia, Soviet Union, his father, Hyman Gottlieb, was 25 and his mother, Sarah Lavin, was 38. He married Sylvia Cohen about 1931, in Illinois, United States. They were the parents of at least 2 daughters. He lived in New York City, New York, United States in 1920. He died on 14 November 1968, in Three Rivers, St. Joseph, Michigan, United States, at the age of 58, and was buried in Kalamazoo, Michigan, United States.

Put your face in a costume from Harold's homelands.

Some characteristic forenames: Jewish Meyer, Emanuel, Cheskel, Heshy, Isadore, Moshe, Chaim, Feivel, Hyman, Isser.German, Danish and Jewish (Ashkenazic): from the personal name Gottlieb. As a German personal name this is for the most part a translation of Greek Theophilos (‘one who loves God’) that became very popular in the 17th and 18th centuries with the rise of the Pietist movement. Among German Jews, it existed, independently from German Christians, since the Middle Ages.German: from the personal name Goteleib, based on Old High German god, got ‘god’ + leiba ‘offspring, son’.