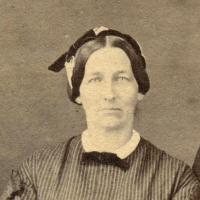 Put your face in a costume from Esther Maria's homelands.

U.S. acquires vast tracts of Mexican territory in wake of Mexican War including California and New Mexico.
English: topographic name for someone whose dwelling was by a river or lake, Middle English atte water ‘at the water’.