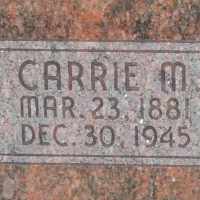 The Life of Carrie

Statue of Liberty is dedicated.
1898 · War with the Spanish