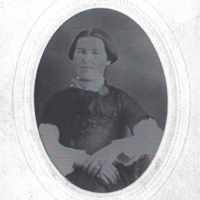 The Life of Frances Amelia

When Frances Amelia Linville was born on 12 March 1829, in Lancaster, Pennsylvania, United States, her father, Solomon Linville, was 26 and her mother, Mary Louisa Passmore, was 25. She married John Patterson Wilson on 4 February 1855, in Champaign, Ohio, United States. They were the parents of at least 3 sons and 1 daughter. She lived in Washington Township, Keokuk, Iowa, United States for about 5 years and East Muddy Election Precinct, Gosper, Nebraska, United States in 1900. She died on 22 July 1910, at the age of 81, and was buried in Harrison, Sioux, Nebraska, United States.

Put your face in a costume from Frances Amelia's homelands.

Many people started their 2,170-mile West trek to settle the land found by Louis and Clark. They used large-wheeled wagons to pack most of their belongings and were guided by trails that were made by the previous trappers and traders who walked the area. Over time the trail needed annual improvements to make the trip faster and safer. Most of Interstate 80 and 84 cover most of the ground that was the original trail.
1857 · The State Capital moves to Des Moines

Of English origin: probably a habitational name from a lost or unidentified place, perhaps in France. The surname is not found in present-day English records, but is recorded in Hampshire (also in the forms Lenvill, Linvel) in the 17th century.Perhaps it is an altered form of English Lindfield or Lingfield, habitational name from a place so called in Sussex, altered by false analogy with the alternation in Norman names between -ville and -field.