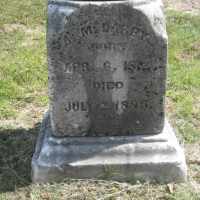 The Life of Arthur McCracken

Put your face in a costume from Arthur McCracken's homelands.

With the Aftermath of the Napoleonic Wars the global market for trade was down. During this time, America had its first financial crisis and it lasted for only two years.
1822 · Slave Rebellion

"On June 16, 1822, Denmark Vesey a free and self-educated African American leads a slave rebellion called ""the rising."" The interesting thing about this rebellion is that it does not really happen. The only thing the judges have to go on is the testimony of people that witness it."
1832 · The Black Hawk War

1 English: habitational name from the city of Derby, the county seat of Derbyshire, but also from the much smaller place called West Derby in Lancashire. Both are named from Old Norse djúr ‘deer’ + býr ‘farm’, ‘settlement’. The usual spelling of the surname represents the pronunciation of both the place name and the surname.2 Irish: adopted as an English equivalent of Gaelic Ó Diarmada (or Mac Diarmada) ‘descendant (or ‘son’) of Diarmaid’, a personal name meaning ‘freeman’. See also Dermott , Macdermott . Insofar as Gaelic Ó Duibhdhiormaigh was sometimes reinterpreted as Ó Diarmada, Darby could also be an Anglicization of this name too. The English surname is also established in Ireland, having been taken to County Leix in the 16th century.