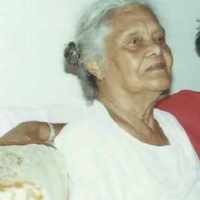 The Life of Asinate Meliame

When 'Asinate Meliame Mapa was born on 26 February 1906, in Nukunuku, Tongatapu, Tonga, her father, Nehumi Mapa, was 37 and her mother, 'Amelia Fanongo, was 33. She married Sione Manu Laiatea. They were the parents of at least 2 sons and 2 daughters. She died on 23 February 2003, in San Jose, Santa Clara, California, United States, at the age of 96.

Put your face in a costume from Asinate Meliame's homelands.

Grandma Meliame had a special place in her heart for my dad, Semisi Lote Mapa, maybe because she loved her older brother Fine so much. I remember as a young girl going to Tatakamotonga (Mu'a) and spen …