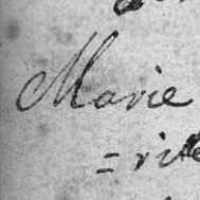 The Life Summary of Marie

Napoleon abdicated his throne and Italy was broken up into small kingdoms.

Small revolutions in the kingdoms. Venice, Rome and Tuscany declare themselves Republics.

form of Maria . When first introduced to England in the Middle Ages, it was Anglicized in pronunciation and respelled Mary . This French form was reintroduced into the English-speaking world as a separate name in the 19th century, and is still pronounced more or less in the French manner, although sometimes with the stress on the first syllable. It is now often used in combination with other names such as Ellie, Chloe, and Lisa.