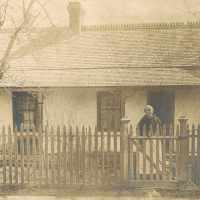 English: locative name perhaps from Rookyard Farm in Old Newton (Suffolk), although earlier evidence is needed to establish this.