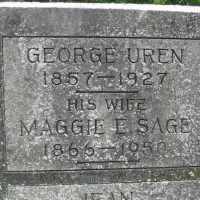 In 1883, there was a mining boom in Northern Ontario when mineral deposits were found near Sudbury. Thomas Flanagan was the blacksmith for the Canadian Pacific Railway that noticed the deposits in the river.
1 Welsh and Cornish: from a Brythonic personal name Orbogenos (probably ‘of privileged birth’), recorded as Urbgen and Urgen in Old Welsh and later as Urien, and as Urbien and Urien in Old Breton. The first element is unexplained; the second represents the root gen ‘birth’, ‘born’. In Cornwall the name may be a survival from the Celtic period or, more probably, a reimportation from Brittany.2 Norwegian: habitational name from any of numerous farmsteads, so named from the definite singular form of ur, from Old Norse urð ‘scree’, ‘rock-strewn slope’.