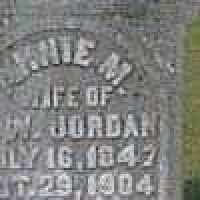 The Life Summary of Annie Mathilda

Put your face in a costume from Annie Mathilda's homelands.

(1997: 2964;2007: 5900; 2010: 7746)English: habitational name from a place in Hampshire called Poland, which probably derives from Old English Pōling or Pulling ‘pool place’. Alternatively, it may be a variant of any of the similar (like-sounding) English surnames, such as Pulham and Pullen , altered by folk etymology to conform to the name of the country in central Europe.Irish (County Offaly, also Armagh and Down): variant of Polin . Compare Polan .