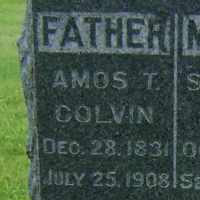 The Life Summary of Amos Thomas

Put your face in a costume from Amos Thomas's homelands.

Scottish and Irish (Donegal, Antrim): variant of Colville , probably reflecting a local pronunciation. The name was taken to Ulster in the 17th century.Manx: if not identical with 1, perhaps from the Old Norse personal name Kolbeinn, with /v/ substituted for /b/.English: from the rare Middle English personal name Colwin, Colvin, which may be a borrowing into English of a Welsh name whose modern form is Collwyn ‘white’, or of colwyn ‘doe, puppy, pet dog’, or of the placename Colwyn (Denbighshire, Radnorshire).