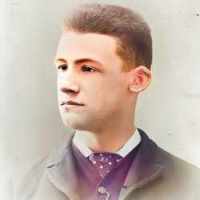 Put your face in a costume from Mansley W's homelands.

Abraham Lincoln issues Emancipation Proclamation, declaring slaves in Confederate states to be free.
English: topographic name for someone who lived on a patch of land where woodruff grew, Old English wudurofe (a compound of wudu ‘wood’ with a second element of unknown origin). The leaves of the plant have a sweet smell and the surname may also have been a nickname for one who used it as a perfume, or perhaps an ironical nickname for a malodorous person.