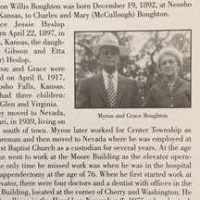 The Life Summary of Myron W.

Put your face in a costume from Myron W.'s homelands.

English: habitational name from any of numerous places so named. Those in Cambridgeshire (formerly Huntingdonshire), Lincolnshire, Norfolk, Northamptonshire, and Nottinghamshire are named from Old English bucc ‘goat’ or the Old English byname Bucca with the same meaning (see Buck 1) + Old English tūn ‘enclosure, settlement’; those in Cheshire and Kent are named with Old English bōc ‘beech’ + tūn.