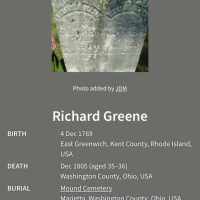 Rhode Island was first to declare its independence from Britain on May 4, 1776.

During 1780 to 1781, over 12,000 French troops occupy Newport, Rhode Island.
1 Irish: translation of Gaelic Ó hUainín ‘descendant of Uainín’ ( see Honan 2).2 variant spelling of Green as an English name or as an Americanized form of name of similar meaning in some other European language.