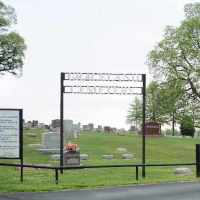 Being a monumental event in the Texas Revolution, The Battle of the Alamo was a thirteen-day battle at the Alamo Mission near San Antonio. In the early morning of the final battle, the Mexican Army advanced on the Alamo. Quickly being overrun, the Texian Soldiers quickly withdrew inside the building. The battle has often been overshadowed by events from the Mexican–American War, But the Alamo gradually became known as a national battle site and later named an official Texas State Shrine.
1 English and Scottish: nickname from Middle English king, Old English cyning ‘king’ (originally merely a tribal leader, from Old English cyn(n) ‘tribe’, ‘race’ + the Germanic suffix -ing). The word was already used as a byname before the Norman Conquest, and the nickname was common in the Middle Ages, being used to refer to someone who conducted himself in a kingly manner, or one who had played the part of a king in a pageant, or one who had won the title in a tournament. In other cases it may actually have referred to someone who served in the king's household. The American surname has absorbed several European cognates and equivalents with the same meaning, for example German König ( see Koenig ), Swiss German Küng, French Leroy . It is also found as an Ashkenazic Jewish surname, of ornamental origin.2 Chinese 金: variant of Jin 1.3 Chinese 景, 荆, 井, 金: see Jing .