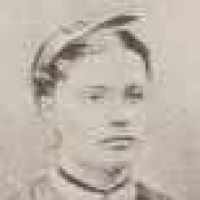 When Anna Spangler was born on 7 January 1850, in Saarlouis, Saarlouis, Rhineland, Prussia, Germany, her father, Peter Spengler, was 40 and her mother, Angela Johanna Eisvogel, was 37. She married George William Metz Spor on 14 May 1872, in Pittsburgh, Allegheny, Pennsylvania, United States. They were the parents of at least 13 sons and 2 daughters. She lived in Adamsburg, Westmoreland, Pennsylvania, United States in 1880. She died on 14 February 1898, in Sarcoxie, Jasper, Missouri, United States, at the age of 48, and was buried in Sac Township, Dade, Missouri, United States.

The three day Battle of Gettysburg was one of the bloodiest of the American Civil War. Between the Confederates and Unions, somewhere between 46,000 and 51,000 people died that day.
German (Bavarian): originally an occupational name for a maker of buckles, from an agent derivative of a diminutive form of Middle High German spange ‘clasp’, ‘buckle’, ‘ornamental fastening’, later coming to mean ‘tinsmith’, ‘plumber’.