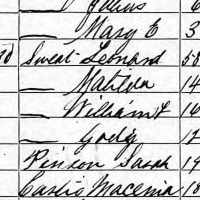 When Leonard Covington Sweat was born on 8 December 1812, his father, Gideon Sweat, was 30 and his mother, Letitia “Letty” Johnson, was 17. He married Elizabeth Burgess on 22 December 1828, in St. Landry, Louisiana, United States. They were the parents of at least 6 sons and 8 daughters. He died after 1872, in Texas, United States, at the age of 61, and was buried in Jasper, Jasper, Texas, United States.

Put your face in a costume from Leonard Covington's homelands.

Being a second spiritual and religious awakening, like the First Great Awakening, many Churches began to spring up from other denominations. Many people began to rapidly join the Baptist and Methodist congregations. Many converts to these religions believed that the Awakening was the precursor of a new millennial age.
Probably a variant of English Sweet .

Found on Ancestry: Submitted by Cheryl Tilley Perkins, Great, Great, Great Granddaughter of Leonard Covington Sweat I. It has bothered me for some time that people are mistakenly perpetuating infor …