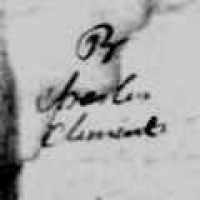 When Charles Clément was born on 31 May 1739, in Pointe-Claire, Montreal, Canada, New France, his father, Antoine Clément dit Larivière, was 31 and his mother, Marie Anne Bourdon, was 27. He married Agathe Jamme on 24 May 1762, in Pointe-Claire, Montreal Urban Community, Quebec, Canada. They were the parents of at least 4 sons and 8 daughters. He died on 28 April 1822, in Vaudreuil-Soulanges, Quebec, Canada, at the age of 82, and was buried in Vaudreuil-Soulanges, Quebec, Canada.

From a Germanic word, karl, meaning ‘free man’, akin to Old English ceorl ‘man’. The name, Latin form Carolus, owed its popularity in medieval Europe to the Frankish leader Charlemagne ( ?742–814 ), who in 800 established himself as Holy Roman Emperor. His name (Latin Carolus Magnus) means ‘Charles the Great’. Carolus—or Karl, the German form—was a common name among Frankish leaders, including Charlemagne's grandfather Charles Martel ( 688–741 ). Charles is the French form. The name occurs occasionally in medieval Britain as Karolus or Carolus; it had a certain vogue in West Yorkshire from the 1400s, particularly among gentry families. The form Charles was chosen by Mary Queen of Scots ( 1542–87 ), who had been brought up in France, for her son, Charles James ( 1566–1625 ), who became King James VI of Scotland and, from 1603 , James I of England. His son and grandson both reigned as King Charles , and the name thus became established in the 17th century both in the Stuart royal house and among English and Scottish supporters of the Stuart monarchy. In the 18th century it was to some extent favoured, along with James , by Jacobites, supporters of the exiled Stuarts, opposed to the Hanoverian monarchy, especially in the Highlands of Scotland. In the 19th century the popularity of the name was further enhanced by romanticization of the story of ‘Bonnie Prince Charlie’, leader of the 1745 rebellion.